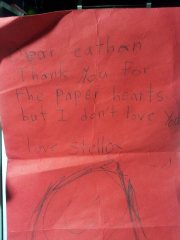 Some of the best parts about being a parent is witnessing the honesty, the innocence and the down right hilarious statements that come from our children’s mouths. They often happen in times that may leave us a tad embarrassed, or in moments when we as parents really needed to laugh…or at quiet moments when they are just sharing their day.

We get so busy in our days of working, shuttling kids back and forth, and the normal craziness of day to day life, that we don’t always realize how much these little sponges soak things up, even from us. My grandfather always knew when I, or my brothers were eavesdropping and he would say ” little ears have BIG mouths” and boy was he right! And, what comes out of those mouths can be great stories all of their own. Take the picture above for instance, in response to receiving a valentine from Eathen, who is seven, the little girl sends a thank you along with ” I don’t love you. Love, Stella.” Priceless.

We often take for granted small minds, and what those may contain. A friend of mine caught her sons Cooper 5, and Logan 4, saying butt hole, and told them very sternly that it was no longer allowed to be said. They understood, and then she overheard them say “butt circle” instead! In all fairness, she didn’t say they couldn’t modify the name or shape.

The first time I let my daughter sit on my lap, and help me drive from the mailbox to the driveway she was about two. I am still in shock by what happened that day. She messed with the rear-view mirror, then blurted “Um hello, drive or get out of the way” while waving her hand and bobbing her head. And, where did she learn that? Me. I knew I was in trouble that day, but it did make me laugh…hopefully the rest of these will make you laugh too.

Coleton, age 8:
Me: “Why don’t you want to go to the football camp?”
Coleton: “I can’t run, I have liver problems.”
Us: How do you know it’s a liver problem?
Coleton: Points to his chest and says “It hurts here”
Us: “That is not your liver”
Coleton: “Well, I don’t know I am not a body-i-ologist”

Gracie, age 11:
Driving through the BestBuy parking lot, I see a man entering the store wearing pajama pants, and slippers and make notice of it to Gracie who promptly says: “He best buy himself some new clothes!”

Ethan, age 3
Me: “Honey you can call me whatever you want. Jess, Mom, whatever”
Ethan: “Anything?”
Me: “Yes, anything”
Ethan: “Sweet, I will call you Five Finger Death Punch – I love them!”

Gage, age 6:
Upon finding Gage’s fish dead, we break the news to him gently and he looks at the hard bloated obviously dead fish and says “No, he is just shy like me, he’s fine!!!”

Tia, age 5:
While eating dinner she loudly proclaimed, “God talks to me when I’m drinking”. When asked what God says to her when she’s drinking, she responded, “I don’t know, He’s speaking in Spanish!”

3 or 4 year old boy:
While working at a daycare, the worker overheard a little boy who kept saying a certain four letter F word, and when they pulled him aside and asked him why he kept saying it, he responded with “my dad keeps saying it, its tax time.” His dad was a tax accountant.

Gage, age 8:
On a family trip to Six Flags Gage says from the backseat:
“Since we are in California does that mean there are a lot of Cows?”
He thought it was “Cowafornia”

Gracie, age 10:
“Mom if the dishes taste soapy, it wouldn’t be because we were out of dishwasher detergent and I used your shampoo! But, hey, at least they smell like coconut! And, yes the kitchen filled up with bubbles too.”

Wyatt, age 4:
From Mom (Christina): My son would sit on my lap and when he got up he would always jab his elbow in my boob and I would say ouch my boob! He called his elbow his boob all the way into kindergarten. If he would scrape his elbow when he was young, he would ask me to kiss his boob!

Gracie, age 9:
Gracie: “Mom, I can’t watch the Justin Bieber movie before bed, because its too sad.”
Me: “What is sad?”
Gracie: “Mom, he loses his voice and can’t sing for a week, it was horrible!!!!”

What about you, what are some humorous things your children have said?

📢BE KNOWN FOR YOUR TRANSFORMATION NOT YOUR SINS🔊. . Truth is we all have a past but few share it. I shared mine today over at @opspodcastshow To be honest I wasn’t even sure why until right now. God uses the most unlikely of people to carry on his message. And I believe that that’s what he was doing with me. I’m simply a messenger for his grace. . If God can forgive me and use me, the same is true for you. I could remain ashamed of my past or I can embrace the voice God gave me to shout to everyone listening, that he has made good of his word. . He has made beauty from the ashes of every bridge I burnt along the way, and as white as the snow am I. Yes, I’ve messed up horribly but never enough for God to turn away from me, or to be ashamed of me. I am not my sins, I am who emerged gracefully because of them. God is good. . . . . . . #godisgood #testimony #godisgoodallthetime🙏 #storyteller #truthseeker #transformationjourney #faithoverfear #sinsarepaidinfullbychrist #redeemed #christianinspirationalposts #inspirationalwomen #waymaker #happinessinprogress #godsnotdone #abortion #abusesurvivor #suicideawarness #savedbygrace #truthbetold💯 #freedomvessel #qualifiedbygod #calledtoserve #podcastersofinstagram #vulnerablepost
I shared part of my past today with someone I’ve never met in person. I told her things my best friends don’t even know. God led me to her and I’m not even sure of his reasoning, but I TRUST him fully. I laid out years of shame in a message possibly with the attempt of unlocking shackles to my own internal prison. A prison which God truthfully unlocked years ago, I’ve just been fearful to step into freedom. . Shame is my biggest battle. Shame controls me and allows others to manipulate and control me. Shame is my enemy, my own Goliath, my own 7 demons, and my own trip to the well in Samaria. Shame owns me and Gods working to change that to a past tense. . Shame hasn’t been all bad though. It has blessed me with seeing people differently. It allows me to love before judging and to offer a safe place to be heard. It allows me a light to shine for others who are lost in the dark. Our battles and even our enemies open up opportunities for change, growth and ownership. I’m not proud of my past, I never will be, but I am proud of how it helps me to see, love and accept others. It’s going to be okay. 🌱🙏❤️ . . . . #shame #grace #regretsandmistakes #god #soulscripts #faithoverfear #wordbeforeworld #trustgod #compassionovercondemnation #ditchtheshame #weallmakemistakes #lovealwayswins #lovealways #bealight #bethelightinthedarkness #waymaker #overcomer #nobodyshame #vulnerabilityisstrength #mystory #freedominchrist #myministryislove #faithhopelove #couragetorise #couragetochange #mystrengthcomesfromthelord #davidandgoliath #samaritanwoman #marymagdalene #empowerment #nobodyshame
That’s all. Nothing less. Everything more. . . . . . #love #lovealwayswin #morelovelesshate #lovewins #moreismore #morelove #moreloveplease #soulconnection #soulscripts #dearworld #createandcultivate #loveotherswell #spreadlove
Sometimes joy and tragedy accompany each other. The issue is assuming the two need to be separated. . Both are important, both are necessary and both matter. . Growth doesn’t just require sunlight, it needs rain too. . Inspired by the doctors story on This is Us. @nbcthisisus @geraldmcraney40 . . . . . . #soulscripts #faithblog #godsgotyou #christianblogger #christianwoman #trusttheprocess #christianmomma #godfirst #spiritofthelivinggod #holyspirit #waymaker #wakeupworld #wordbeforeworld #faithoverfear #godspromises #thewordofgod #oregonblogger #gritandvirtue #godsgrace #overcomer #chosen #youarenotdisqualified #youareloved #thisisus #thisisusnbc #jackandrebecca #joyinthejourney #beautifultragedy
Thousands of years before her Jesus wrote on the ground as an adulterous woman was brought to his feet. That woman carried the weight of sin, humiliation and judgment from externally expressing what was broken internally. . As the people judged and wanted to stone her, Jesus wrote on the ground and spoke, “He that is without sin among you, let him cast the first stone at her.” No one remained because his words ignited the consciences in those around her. . Thousands of years later those drawings on the ground extended from repairing one broken woman, to raising generations of whole women. Women who instead of casting stones in judgement, caused ripples in water extending compassion, love and forgiveness just as Jesus had. . . . . . . #bearipple #soulscripts #faithblog #godsgotyou #repenttoday #getrightwiththelord #christianblogger #christianwoman #trusttheprocess #christianmomma #christjesus #godfirst #spiritofthelivinggod #holyspirit #waymaker #myredeemer #wakeupworld #wordbeforeworld #faithoverfear #godspromises #thewordofgod #oregonblogger #gritandvirtue #godsgrace #overcomer #chosen #youarenotdisqualified #youareloved
I saw this today and my heart sighed. This it the goal friends. I don't want to know what beauty products you use to hide your scars - I want to know you have scars. Jesus had scars. He not only had scars but he let Thomas touch them and see them. His scars were what made him human, and his love was what made him holy. Atleast to me. I want the world to know I have messed up. I want the world to know I am massively imperfect. And, I want people to know and understant that even with all my flaws, all my failures, a past that is not one to brag about and that I am still actively healing from that GOD STILL LOVES ME and WANTS ME. I'm nowhere near disqualified and NEITHER ARE YOU. I will never whisper or hide my mistakes, my pain, or my shortcomings because we are all human, all with scars and together is how we heal. #yourenotdisqualified . . . . . #soulscripts #faithblog #godsgotyou #repenttoday #getrightwiththelord #christianblogger #christianwoman #trusttheprocess #christianmomma #christjesus #godfirst #spiritofthelivinggod #holyspirit #waymaker #myredeemer #wakeupworld #wordbeforeworld #faithoverfear #godspromises #thewordofgod #oregonblogger #gritandvirtue #godsgrace #overcomer #chosen
%d bloggers like this: