Two things, that’s all I really hoped my kids would be blessed with – because with those two things they could conquer the world.

One thing I wanted most for my children was for them to have a mother, an involved mother, someone who made time for them, whose hugs healed any pain, and whose ears listened to every story, worry, or concern. I wanted my daughter to have a lap to lay in, and hands to play with her hair. I wanted her to have a woman she could trust, a friend she could laugh with, and someone to show her its okay to make mistakes. I wanted her to have the woman in her life that I never had in mine, a mother. The same with Gage, I wanted him to have someone who would make him dance in the kitchen when a slow song came on, someone to nurse a scrape, tell him he would do better next time or someone to blow raspberries on his tummy until he could barely stand it. A woman for him to be proud of, the one that makes the best peanut butter and jelly sandwiches because they are made with love. And, the one woman whose heartstrings are attached in such away that whatever affects him affects her – a mother.

The second thing I wanted was for them to understand how vital their role as brother and sister to each other was. I can’t tell you the amount of times in the past nine years I have said “be nice to each other, you can’t possibly understand how important this relationship, this friendship will be when you are older!” Now, the two of them would be lost without the other. They have been this tight little twosome from day one. They were each others first real friend, and have grown into best friends. You probably are thinking – ya all kids are close, but by close I mean Gracie is like a second mom to Gage. 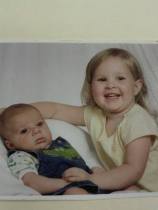 One of my favorite stories of Gracie and Gage was when Gage was about three months old. He was sleeping in his crib so I ran for the shower, literally! It couldn’t have been more than ten glorious minutes before I could hear crying from the other room, and I did what every mother to a second child does – continued with my shower thinking he would go back to sleep. Well, I was wrong, he kept crying, so I rinsed off, and then all of sudden the crying stops. I think to myself “okay maybe I will stay in here just a bit longer.” Then, I thought again…and all the mommy over analyzing took over and I hurried to the room. I’ll never forget what I saw when I peaked around the corner into the room – it melts my heart even now. There in his crib was Gracie about three years old, with her baby brother in her lap, her shirt pulled up on one side, trying to breast-feed him. And that is where their story starts, they have a bond that every mother wants for their children to share. 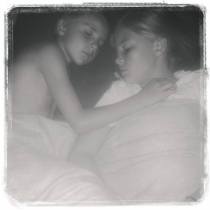 Trust me they too have their days and moments. Gracie once while watching a commercial that was listing side effects leading to mental retardation if taken while pregnant, questioned if I took that medication while pregnant with Gage. And, for about six months she called him “big tooth” because he only had one big kid tooth up front (which was admittedly big)while waiting for the other to grow in. She even tricked him into picking up dog poop for a year by trading him a pack of gum, he didn’t realize each piece was equal to a month! He too has had his moments calling her chunky or mean and teasing her about liking boys, but you try saying one thing about the other, and see how quickly the other sticks up for them. They truly love each other, my daughter sneaks in and kisses her brothers forehead once he has fallen asleep, and at night if he is scared he will ask sissy if he can sleep with her.

In my opinion there is not a more important relationship between children other than that of their siblings. They learn trust, honesty, dependability, not to mention every bad habit we don’t want them to know, and most importantly how to love unconditionally. What about you? What is one relationship you want to encourage your child to experience?