Sitting next to my brother in McDonald’s PlayPlace yesterday opened my eyes to world of traveling visitation. Its not your normal run-of-the-mill visitation that you have with a local parent, where you have a weekend together. I’m talking about the parents that have to travel to see their children, whether it be a half-hours drive or even a flight across the United States.

We drove five hours to where they live in California, and spent seven hours in court rooms or other government buildings. Following a long hard day of roadblock after roadblock, we drove another thirty miles to pick up they boys, only to drive thirty miles back to town to spend three hours with them. My brother was exhausted from the drive, emotionally letdown from all the legal mumbo jumbo, and court hoola hoops he was jumping through. Seeing them was by far the highlight of the day, the way they came running down their hill to their dad waiting with tears and open arms was enough to make anyone tear up. Their smiles were from ear to ear, they had missed him since his last visit in July and were beyond ecstatic that he was there.  Knowing that his visitation time with his sons was limited, he soaked up every bit of it that he could,  that realization was visible all over his face. He would look at the kids, laugh, hug them and as they would turn away it was if the flame within him was blown out. 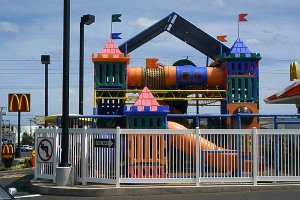 Watching my brother snapping pictures of his boys, smiling at them, laughing with them, and hanging on every word of “Dad – watch me” or “Dad guess what?” I wondered how many other kids at that playground were there for visitation also.  When traveling out of town, depending on the time allowed for the visit, its hard to find a quality place for quality time. Many travelers arranging with a custodial parent will use a common place, a place easily located and well known, and helps when there is a playground close by. It was the first time I saw McD’s as anything more than a fast food joint with a cool playground and a yummy strawberry shake. Today this popular drive-thru was a drop off place for parents, a visitation station for those from out-of-town and the place where some -parents sat smiling soaking in every detail of their child – only to face saying goodbye shortly after.

The boys were having a blast in the playground area and would take turns running back to their dad to hug him, to talk to him, just the exciting realization that he was there. They both kept wanting to put on the costumes dad had bought them at the local Halloween City store.  To them this time was fun – to my brother it was wonderful outlined with heartbreak – because he knew he would be leaving them again. To be honest it hurt me as well. This was the first time I had met my nephews, and I too was saying goodbye to them.

The judges in these cases, granted the cases where parents are deserving of the visitation, really need to put traveling time into consideration. After a twelve hour day, a three hour visit seems ridiculous to me. Giving a three hour visit, that takes 10 hours of drive time in all, once a week – is of course a blessing to see your children, but then again its hell. Why not an overnight, or a weekend? It just seems that the system has a lot of things backwards if you ask me, but luckily in my brothers case this will all be ending soon.

After kissing the boys and snapping one last photograph, they were off with their Mom, and my brother settled into his seat in the car. What was on his mind for sure, I couldn’t say, I told him it was okay to cry, and he said he already had. Those boys are who he is, they are what makes him alive, and although he has a beautiful happy little boy here at home as well, you could tell his family just wasn’t complete yet. Even his wife, was saddened to not have these boys more, to get to interact, have them bond closer to their little brother and feel the closeness a family should feel.

For that day though, we were happy for that hamburger happy meal with a side of visitation.

Have you ever had a drive-thru visitation of sorts?

2 thoughts on “Happy Meal with a side of visitation”

There’s been a lot of talk about Gabby Petito, domestic violence, and loving toxic people.
Since Gracie was a little girl and could mutter a sentence we have had this little saying, “I love you from Reese‘s pieces, stoplight, house.” We were driving down the street and we must’ve been eating Reese‘s pieces and passed a stoplight and then passed a house etc. And it just kind of stuck from there. Her being in Stillwater, and so far away on her birthday I wanted to do something special. I reached out to a local cookie decorator and baker in the Oklahoma area. Amanda @whisk__sugar was able to create the perfect cookies for Gracie! She was able to create an entire theme off  of everything that I asked and incorporated the Reese’s pieces, the stoplight, and the house! !!
I read something this morning likening the love Jesus had for us in the Garden and ultimately dying on the cross to the love a mother has for her child. That there was no limit to how far a mother would go to protect her child, and Jesus was no different with us. We as mothers would endure that same torture to save our children.
She committed long before she got accepted. Now we’re all committed and it’s a family thing!
She's shown me that it's okay to be a little wild, different and outspoken. That it's beautiful to be uniquely unafraid to be bold and unapologetically yourself. That maybe it's okay to break the rules sometimes 😉 and march to the beat of your own drum.
God showed me my heart in his hands at a potter's wheel. It was stretched, worn out, and misused but still his piece of artwork that he lovingly held in his hands. He showed me how gently he holds us, how he wants to take the beautiful parts of us and add to them. And, cut away the rough edges. He’s shown me this when I pull weeds before but this was powerful in a different way because as he was holding me (my heart) and the pottery wheel began to spin he showed me how vital the water is to remolding the clay!